Alumna Dr Alison Rylands reminisces on her time at Lucy

It’s hard to believe that it is almost 39 years since I pulled up outside College House on 2 October 1981 in my father’s red Datsun pick-up truck loaded with all my worldly possessions ready to start my Cambridge career. I felt like Ellie May Clampett from the Beverley Hillbillies (you may need to Google this classic 60’s TV show).

I was reminded of that first day and the feelings of trepidation I had when I met up with a group of Lucy graduates at the recent reunion in Manchester and we shared our experiences of arriving at college. Although it was perhaps not as a big a transition for me as for some of my fellow students – I had only graduated from Manchester University three years earlier – it still felt like a big challenge. I was leaving behind friends, family and a job I really enjoyed. It also seemed to me that Cambridge was a long way from Liverpool (it was) and an incredibly difficult place to get to (it still is) so I wasn’t expecting many visitors. This concern proved completely unfounded and during my time at Lucy, I entertained a host of friends and family at the many and varied social events that appeared in our diaries at regular intervals. I still have the invites to the ‘Bubbly Party’ held in June 1982 and the ‘Glitter Party’, which took place in November 1982 as well as several rather incriminating photographs of some very dodgy outfits, not to mention the hairstyles.

I read Medical Sciences and in those days, Lucy Cavendish only admitted one medic per year (it is interesting to see that Medicine is now the largest subject community in college) and although there were several vets at Lucy who attended many of the same lectures as me, my ‘single status’ meant I spent quite a lot of time mixing with and visiting medics from other colleges, in particular, Trinity Hall and King’s, where I managed to avail myself of lunch almost every day courtesy of my biochemistry practical partner – the food was great and it was much nearer to the Downing site than Lucy. My Director of Studies was from Clare College and my many supervisors (medics covered a lot of different subjects) were from a variety of colleges across the university. At first, I thought this might be problematic but it turned out it was a good way of getting to know Cambridge, other colleges and of meeting lots of interesting people.

I also soon came to realise that to an 18-year-old straight from school, being 25, as I was, meant you were as old as Methuselah – one of my dissection partners actually asked what the fine lines around my eyes were - I refused to let this get me down!

As an affiliated student, I was only at Lucy for two years and no sooner had I arrived than I discovered I had to find somewhere to do my three years of clinical studies. I had no idea where I should go and so applied to a random selection of London medical schools. I had a particularly difficult interview with the Dean of The London Hospital Medical School, who not only asked about my ‘O’ level Latin (bizarre given I had ‘A’ levels; a degree in pharmacology and was studying medicine at Cambridge) but also seemed to think Lucy Cavendish was a secretarial college. He was horrified to discover we were actually allowed to row on the Cam! Needless to say, I didn’t shed any tears when my application to The London was rejected but his attitude did make me think – I’m sure this wouldn’t happen now, given Lucy Cavendish’s much higher profile and its academic and sporting successes.

I graduated from Lucy Cavendish in 1983 and continued my medical studies at the Westminster Medical School in London, qualifying as a doctor in 1986. I remained in London for a few years doing various junior doctor rotations before returning to Liverpool to take up a place on the specialist training scheme for Public Health Medicine, which is primarily concerned with the health and care of populations. It covers health promotion, health protection (think coronavirus), disease prevention and health care planning – ensuring health services are effective, efficient and available to all. I specialised in this area of Public Health, initially in the North West of England and then across the whole of the North finishing my career as the Specialised Services Regional Medical Director for NHS England. I was part of a dedicated team responsible for ensuring safe and effective specialised services (high cost, low volume services such as heart transplants, renal dialysis etc.) were there when people needed them. A daunting task given the geography, the size of the population (14.9 million) and its diverse nature. The work was always interesting if somewhat challenging – it’s never easy deciding which hospital should host a specialist service, particularly if you’ve got Liverpool and Manchester in your patch.

I retired from this role in 2016 after 33 years in the NHS and I am now enjoying spending time catching up with friends, exploring new places and seeking out cultural opportunities (sounds weirdly like Star Trek!).

I have to admit I was not filled with joy when Judith asked me to produce something for Nautilus but writing this short piece has actually been hugely enjoyable – I went rummaging through my boxes of memorabilia and found all sorts of ‘stuff’, which instantly transported me back to College House ‘dinner parties’ in the kitchen (we actually wore our gowns – I have photographic evidence); meetings of the Bar Committee; rowing (badly) at the Bumps – I know this aspect has definitely improved; dissecting every Saturday morning; late night supervisions; the College Garden Party, complete with Morris dancers; and most of all, the wonderful friends I made. Cambridge and Lucy Cavendish, in particular, was an amazing experience for me. I met lots of interesting and diverse people and had avocado and courgettes for the first time – it’s tough up t’north, you know! I loved being a doctor and enjoyed the many challenges my various jobs provided. I am so grateful to Lucy Cavendish for giving me the chance to fulfil my dream and achieve my potential. I hope it continues to do the same for women (and men) for many years to come. 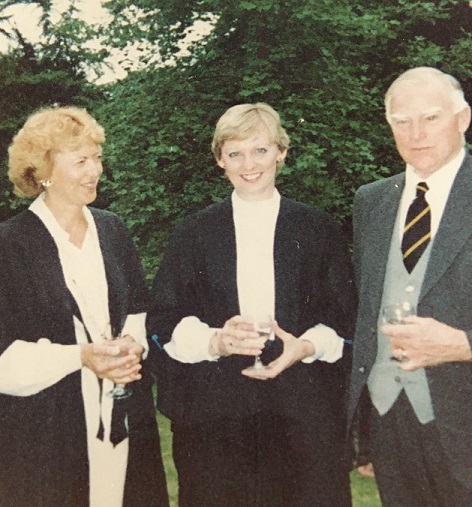