As the Connections project continues, another Poet-Scientist pair delivers fascinating insights on the creative challenges ahead.

This is a picture of Heliconius butterfly. They live in Central America and the southern States, and they have remarkable brains​. The red areas in this second picture indicate parts of the insect brain known as ‘mushroom bodies’, which are involved in learning and memory. The mushroom bodies in the brain of a Heliconius butterfly are significantly larger than those of any other butterfly, and indeed of any other insect. 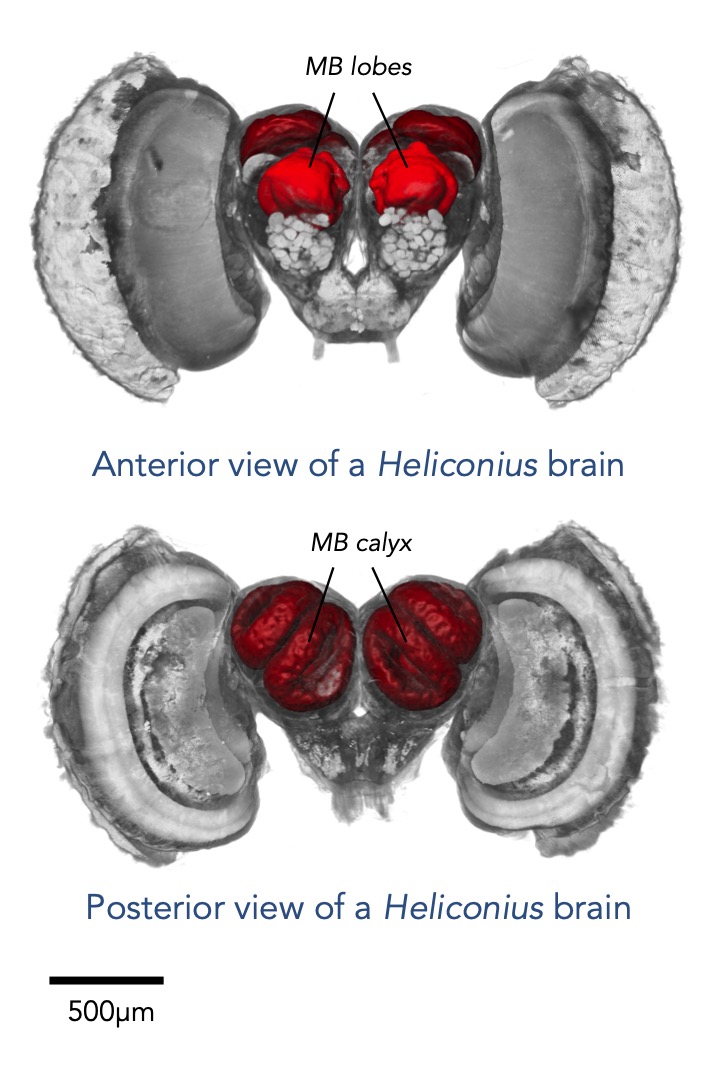 As you would expect, this unique brain anatomy corresponds to unique behaviour patterns. Unlike other butterflies, Heliconius butterflies have routines, and these routines involve their following regular daily routes through their habitat: in the early light they rise from their habitual roosts; they spend the morning gathering nectar and pollen and the afternoon looking for suitable places to lay eggs (if female) or females (if male), before finishing the day with a brief evening feed and returning to their roosts. The maintenance of these routines require them to have a sense of where they should be, when they should be at a particular location, and how to get from one place to another. For an insect, it is an astonishing feat of memory. The third picture is a confocal image showing areas of the mushroom body calyx that receive visual (magenta) and olfactory (green) in one of our Heliconiini butterflies.

My Connections partner, the zoologist Dr Stephen Montgomery, has been studying the Heliconius butterfly and its brain composition in the context of evolutionary neurobiology. To put it simply, the Heliconius is this clever because it needs to be clever. It is a specialist, dependent on one particular group of plants to host its larvae and another very particular group for its own food.  This specialisation means that a Helconius butterfly needs to store enough sense data (see third picture) to be able to distinguish these plant species from others, remember where individual plants are located and how to navigate from one plant to another.

Writing a blog about this unique butterfly brain is relatively straightforward, but writing a poem, a thing made out of language, about a brain which has no capacity for language, is something of a challenge. The temptation would be to take the Heliconius and use it as an analogy for something human, but that would be something of a cheat, and a missed opportunity as well. When Stephen and I first discussed the project, I asked him about his own experience of researching these animals, and what he would most wish to convey in a poem. He talked about his field research in Panama, about the overwhelming sensory chaos of the environment which the Heliconiini navigate every day. So I decided to begin with rhythm, with sound. First, I watched some YouTube videos of treks through the Panamanian rain forest. I exhausted those quite quickly, and then YouTube led me to the human music of Panama, and from there to the dances of Panama. I learned about the Panamanian folk dance, known as tipico. Men and women dance together, but it is the women you notice, as they take up the space, holding voluminous skirts out to their fullest extent and gliding across the floor. Stephen has told me that, in their shape and their movements, the dancing women bring to mind the slow, graceful flight of the Heliconius. So what I need to write now is a Heliconius tipico.

Joanne has published three collections of poetry; Feminismo was shortlisted for the Forward Prize for Best First Collection, and Paraphernalia was a Poetry Book Society Recommendation. Her collection for children was shortlisted for the CLPE Poetry Prize and Highly Commended. She’s also written two memoirs and a novel and has a Creative Writing PhD from Kingston University.

Stephen is an NERC/ERC Research Fellow, School of Biological Sciences, University of Bristol. He’s interested in how brains adapt to different environments, how changes in brain structure produce behavioural differences, and how selection navigates developmental and functional constraints that may limit or channel the adaptive response.