How did you end up in an acting career?

When I first arrived from Denmark to start the  Psychological and Behavioural Sciences (PBS) course I had no idea of the huge theatre scene in Cambridge. So I was very excited when some of the students from the years above arranged a trip to the ADC during Freshers’ week. I started auditioning for the numerous plays that were being put on each term, and very quickly had to learn to balance the degree workload with the hours spent at the ADC. Although I really enjoyed doing my degree, and learned so much from it, during my first year I realised that I loved acting. And after going on tour with The Cambridge American Stage Tour’s (CAST) production of Much Ado About Nothing, I knew I wanted to pursue a career in acting. So during my time at Cambridge I did my best to do as much drama as possible on the side of my degree. I was lucky enough to be in the CUADC/Footlights Panto, The Arts Theatre show, The Marlowe Showcase and go on the Footlights American Tour to name a few. I had some incredible experiences, and got to work with some of the brightest and most talented writers, actors and directors.

What happened after leaving Cambridge?

After graduating from Cambridge I started applying for drama school. I ended up going to Lamda from where I graduated last year. So I’m still very new in the field. I’ve been lucky enough to have some minuscule parts in a couple of films, and during the past year I’ve been working on a major video game. But the work is very patchy, and right now the future of the industry is very uncertain. So I have to work part time jobs on the side of auditions. Realistically the life of an actor isn’t very glamorous but I love it, and there is nothing else I’d rather do.

What do you think people would find most inspiring about your career and why?

Everyone is different, but I think what I find really interesting about acting is that you get to dive into different lives and stories. You have to approach characters from an empathetic standpoint, so I’d like to think it helps me be kinder and more understanding towards the world around me. Ultimately though I guess it is play-pretend for adults, which I find incredibly joyful.

Acting as a profession encompasses lots of different things, from text work to voice and physicality. So you get to do lots of different kinds of work. When you are working, very few days are the same. This is also something I love about the profession.

What advice would you give others thinking about a similar career?

As I mentioned I am still at the very early stages of my career. So I am probably not the right person to give advice. However I can pass on the advice I have been given in the past.

Try to get involved with the theatre scene in Cambridge while you’re there. There is a wealth of opportunity and what better place to practice? Go to as many auditions as possible because you’ll get lots of rejections, but if you keep pushing eventually you’ll get a part.

And go to the theatre as much as possible, you learn from watching too!

I was also advised to go to drama school, when I worked with a couple of professional directors on shows. This may not be for everyone, but I think especially if you’d like to do theatre work having trained is a huge help.

What do you remember about your time at Lucy?

I loved my time at Lucy, and found it to be three very transformative years of my life. I look back at my time there with such fondness. I made friends for life, both inside and outside college, and learned so, so much.

The staff at Lucy have always been so kind and warm to me. Even this year I got an email on my birthday!

And I must mention the late Leigh Stoeber who was the Senior Tutor while I was at Lucy. She was so incredibly kind to me and helped me so much when someone very close to me passed. Leigh would always have her door open and a box of chocolates on her desk for anyone in need of a chat. And I think that encompasses how I remember my time at Lucy, a warm and personable place that supports and encourages the students’ growth. I feel very lucky to have spent three years there. 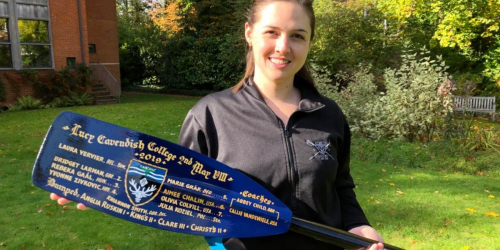 Alumna Aimee Chalin (Master of Law, 2019) talks about defence law and her experience at Cambridge