Professor Henriette Hendriks’ main research area is cognitive linguistics, and she researches the relationship between language and cognition through work in child first and adult second language acquisition.

Professor Hendriks studied Sinology at Leiden University, and then started her career at the Max-Planck Institute for Psycholinguistics where she worked as a coordinator on three different research projects, two DFG projects on child first language acquisition (PI Dr Maya Hickmann), and an ESF funded project on adult second language acquisition (The Structure of Learner Varieties, PI Prof Wolfgang Klein).

In 1998 she moved to the University of Cambridge, where she has since been lecturing and researching first and second language acquisition, discourse analysis, and linguistic relativity. During her time in Cambridge she was PI on the EF-Cambridge Research Unit grant, and Co-I on a large number of other grants (European and UK based), most recently on the OWRI MEITS programme, researching language acquisition in a taught context in the UK.

She was recently elected to the Vice-Presidency of the College, and was previously on the College’s Council. She also served as the Praelector of the College (the person who is involved with student matriculations when they first arrive in Cambridge, and with the Graduation Ceremonies or, Congregations).

Research Interests: Is language influenced (or structurally constrained) by the way we think, or is our thinking influenced by the language we speak? This is one of Dr Hendriks’ main areas of interest. She researches this area by looking at the expression of person, space and time cross-linguistically, and by comparing child (still developing their thinking) and adult language learners (mature thinkers). Rather than just using production data, she also looks at memorization and categorization of information, measured by means of eye-tracking and behavioural tasks other than language production.

Published works can be seen at https://www.mmll.cam.ac.uk/dr-henriette-hendriks 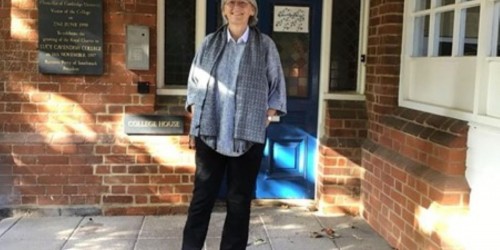