Adrian is Vicar of the University Church in Cambridge, better known as Great St Mary's; the latest in a line of Vicars since the first was presented by King John in 1205! As well as overseeing the large team of staff and volunteers at Great St Mary's, Adrian plays a part in the spiritual life of the University and City, and is developing Great St Mary's as a centre for conversation, debate, and engagement in the realms of theology, faith, and ethics in the public square.

Adrian is a graduate of the Universities of Durham and Oxford. After his ordination in 1992 Adrian served as a curate in Lichfield, as a Team Vicar on a housing estate in Stafford, and then as vicar of a large post-industrial parish in Walsall. He then spent seven years as a Residentiary Canon at Coventry Cathedral before spending eight years in the Diocese of Oxford as Rector of Woodstock and Bladon, Area Dean of Woodstock, and Assistant Archdeacon of Dorchester.

A keen musician and a Fellow of the Royal College of Organists, for a few years Adrian could be heard at the organ in episodes of The Archers. As well as music, he loves sport (especially squash and cricket), literature, theatre and cinema, and travelling at home and abroad. He has published on the spirituality of Julian of Norwich, liturgy and worship, and the theology of sacred space. Adrian is married to Lucy's tutor and Bye-Fellow, the Rev’d Dr. Megan Daffern. 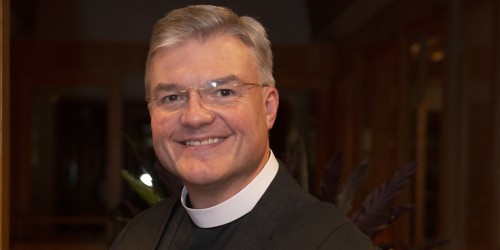 'Life goes on. This will pass. Praise the Lord. And praise the NHS.'

The Reverend Canon Adrian Daffern, College Fellow and Vicar of the University Church in Cambridge offers some wise words on ‘The New Normal’