HarperCollins to publish novel by Sarah Harris, One Ordinary Day at a Time

Sarah’s novel promises to deliver an uplifting and inspirational read. The story is about lost potential, ambition against the odds and an unlikely friendship. It focuses on the importance of human connection, kindness to others and life experience in our learning and self-development. In the fascinating interview that follows, Sarah describes her own inspirations and how the Lucy Cavendish community helped shape her story.

What's your background - can you provide a brief bio?

I’m a freelance education journalist and author. I’ve written three young adult books for teenagers under a pseudonym, Sarah Sky. These are Code Red Lipstick, Fashion Assassin and Catwalk Criminal – all published by Scholastic. My debut adult novel, The Colour of Bee Larkham’s Murder, was published by HarperCollins and won the Books Are My Bag breakthrough author award in 2018. It was also a Richard and Judy pick in WHSmith. One Ordinary Day At A Time is published by HarperCollins on June 10.

What inspired your story and was it based on personal experience?

One Ordinary Day at a Time is about Jodie Brook, a homeless single mother and ex care-leaver, who still dreams about studying English at Cambridge University. She meets Simon Sparks, a former child genius who was one of Cambridge’s youngest ever students. He’s now shovelling (and burning) fries at Prince Burger. Jodie persuades a very reluctant Simon to tutor her for the Cambridge exam, but he has dark secrets that could ruin both their futures.

The inspiration mainly came through my work as a freelance education journalist. Every year, on A-level and GCSE results’ days, I usually write about the youngest child to pass an exam. Before coronavirus, more and more parents got in touch each year, keen for their son or daughter to be profiled in national newspapers. The children became younger. I often wondered what happened to them when they grew up. Were they happy? Did they wish they’d had a normal childhood without the pressure of early exams? Would they become tomorrow’s great thinkers, inventors and scientists or had they just been drilled to pass tests? I’ve also watched Channel 4’s Child Genius for years – it’s a competition to find the country’s brainiest child and also features some of the country’s pushiest parents. A few of the parents in the last series were particularly jaw-dropping in their quests to make their children succeed at all costs. Simon was born from these inspirations ­– a former child genius who was pushed too hard, too early, with disastrous long-term consequences.

I was also keen to write about Simon’s opposite – someone who is written off by the education system at a young age and consigned to the scrapheap. Children in care are at a particular disadvantage – it continues to horrify me that not enough is done to support many of these youngsters when they are still at school, let alone when they’re deemed old enough to fend for themselves in the world. This person became Jodie, a bright young woman who was thrown out of school before sitting her A-levels due to her pregnancy and told by teachers she’d never succeed in life. Yet, she still harbours a burning ambition to succeed by winning a place at Lucy Cavendish College to study English and eventually becoming a teacher.

What are the key messages in the book and its key aims?

I wanted to write about lost potential, ambition against the odds and an unlikely friendship. Both Jodie and Simon must overcome the wounds of the past before they unlock a brighter future, but they can’t do it alone. My book is about how what we learn from human connection, kindness to others and life experience is so much more important than memorising facts and figures from a textbook – all served with a side of Prince Burger fries and a dollop of humour!

How do you think this will impact others who can directly relate to the story?

Hopefully, my novel will inspire other people to realise that it’s never too late to pursue your dreams. Many people change careers or return to studying much later in life. Don’t listen to the doubters and the people who try to put you down – believe in yourself and never give up.

Why did you choose Lucy Cavendish?

I’m not a Cambridge graduate. The teacher responsible for careers at my state school told me I wasn’t bright enough to apply to Oxbridge, despite being predicted straight As in my A-levels. She even went as far to tell me I wasn’t clever enough to go to university at all, and certainly not to study my favourite subject, English. I watched her write down “more suited to business studies”. I’m sure this geography teacher wrote off a lot of pupils with a single stroke of her pen. I absolutely loathed her ­– everyone did. I remember the upper sixth formers displayed an effigy of her from a top floor window of the school on their last day. Thankfully, I ignored this teacher’s “helpful advice” and applied to Nottingham University to study English – I went on to gain a 2.1. This teacher’s words still rankle though and I often wonder what would have happened if I had applied to Cambridge to study English?

I knew that Jodie must pursue what I hadn’t. I searched online for a mature students’ college that would welcome people from a wide range of backgrounds. I came across Lucy Cavendish – I was already vaguely familiar with it as I follow the Lucy Cavendish Fiction Prize each year. I got in touch with the college’s former press officer, Kate Coghlan, and she invited me for a tour. I was blown away by how helpful and friendly everyone was that day. I met former admissions director, Dr Victoria Harvey, and later interviewed a student, Bonnie Samuyiwa, about life as an undergraduate, and Dr Isobel Maddison, who helped me with the interview process and English undergraduate course. Kate continued to be very helpful as I wrote the book. I’ve previously visited quite a few Cambridge colleges as my husband had studied for his PhD at the university, and I’ve always found them quite austere. Lucy Cavendish felt different – it has such a warm, friendly and family atmosphere. I felt this was a college where someone from a disadvantaged background like Jodie’s would feel accepted, be supported throughout their studies – and eventually flourish. I was confident I’d found the right setting for my book. Lucy Cavendish was Jodie’s future home.

Is it very different from your first novel and why?

My debut novel, The Colour of Bee Larkham’s Murder, was about a boy with synaesthesia who sees the colour of all sounds. He believes he is responsible for a neighbour’s murder as he saw the colour of Bee’s screams the night she disappeared from his street. I did a lot of research for this book – interviewing people with synaesthesia and face blindness, learning about the life cycles of parakeets and painting with acrylics. I was planning to write another mystery novel, but the idea for this book suddenly hit me and initially I could hear Simon’s voice very strongly in my head. I wrote quite a few scenes involving his interactions with Jodie and both their voices grew and grew, becoming equal in importance. I realised this was the book I had to write next because I didn’t want to leave Simon and Jodie’s world. I had to see what happened to them when they were both challenged in different ways.

Who will read it and enjoy it the most?

Hopefully, my book will have a wide appeal, particularly for people who want to read something uplifting and inspirational after the stresses of the last year. The themes of trying to better oneself and facing hurdles along the way, may resonate with a lot of people. I also think it will also be a good novel to discuss in book clubs and will appeal to fans of Eleanor Oliphant Is Completely Fine, The Rosie Project and Starter For Ten.

What do you plan to write next?

I’m currently researching and planning my next adult novel. I’ve also almost finished the first draft of a Young Adult thriller. It’s fast paced and fun to write. I’ve enjoyed plotting all the twists and turns and red herrings!

Disclaimer: One Ordinary Day at a Time is a work of fiction. Unless otherwise indicated, all the names, characters, businesses, places, events and incidents in this book are either the product of the author’s imagination or used in a fictitious manner. Any resemblance to actual persons, living or dead, or actual events is purely coincidental. 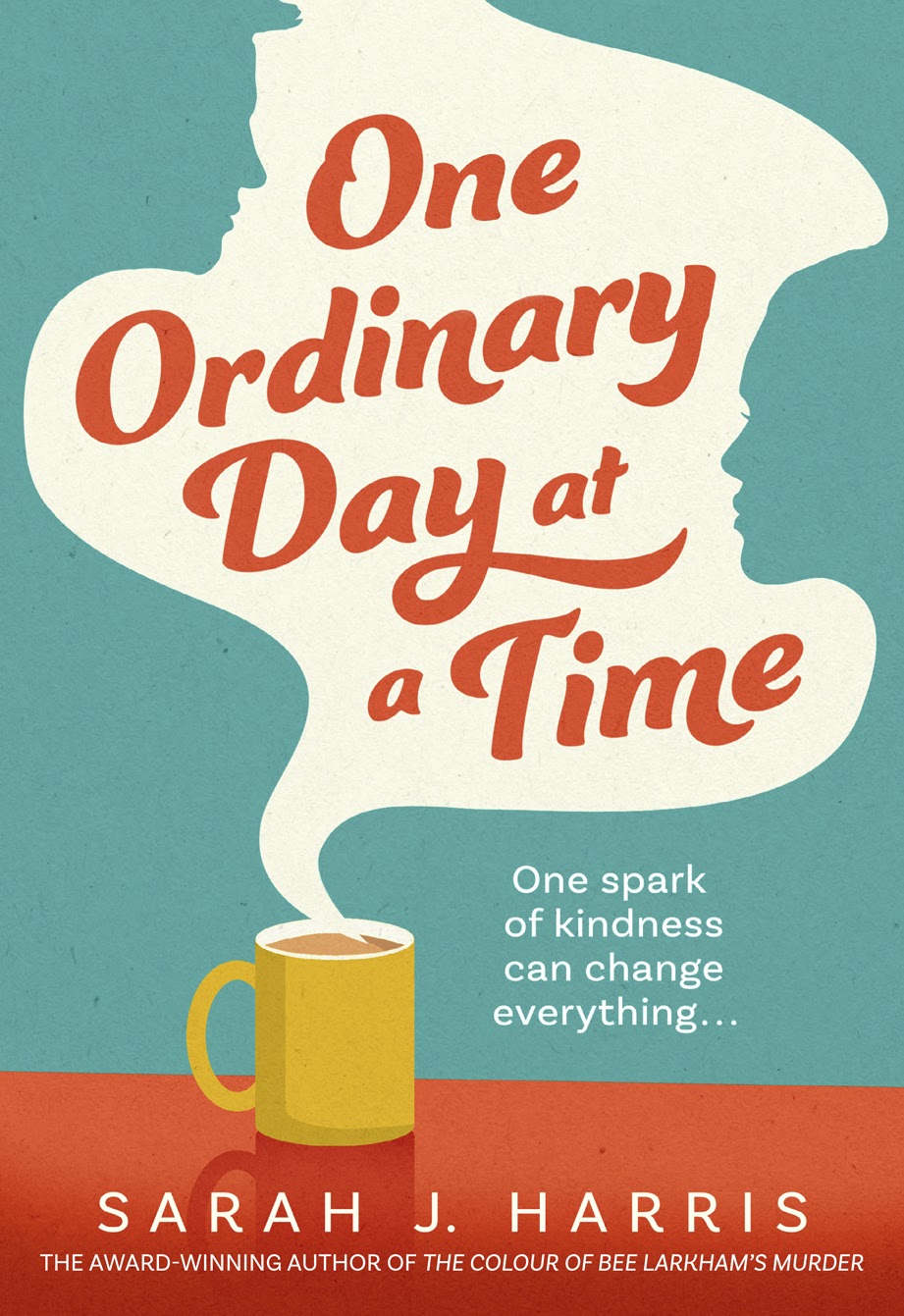