I have been part of the Cambridge University Dancesport Team (CUDT) for the entire duration of my time in Cambridge and I have been a member of First Team since 2017.

The Cambridge University Dancesport Team is a competitive team where members compete in the 10 dances grouped under the Ballroom and Latin American styles, i.e. Waltz, Tango, Viennese Waltz, Foxtrot and Quickstep for Ballroom, and Samba, Cha-Cha-Cha, Rumba, Paso Doble and Jive for Latin American.

CUDT comprises three teams: Beginners team for people with no previous Dancesport experience, Second team and First team. Couples, which can be ‘mixed sex’ or same sex (these couples can dance in all categories, but they also have a dedicated Same sex category, where no mixed sex couple can compete), take part to competitions both as single couples in a category which is suitable to their level of dancing (Beginners, Novice, Intermediate, Advanced, Same Sex) and in the evening, the top performing 24 couples, usually selected from First and Second team, enter the Team Match competition, where individual couples form a Latin and a Ballroom team representing their University. During the team match, couples are scored individually, and their score contributes to the overall team result.

I started this sport when I was ten and competed for the entirety of my high school years and then I had to stop, because I moved to a different city for my undergraduate and master studies and finding a new dance partner, covering costs for dance apparel, private lessons and training was not feasible without weighing on my parents finances.

CUDT has been a second family to me. I had the chance to meet some of my closest friends here in Cambridge and it has allowed me to grow as a person as well. I have changed 4 different partners from my first year, but every single year we achieved very good results. In my first year, my partner and I reached the Ballroom final in the Novice Category at Nationals in Blackpool (February 2017), when I was still part of the Second Team. On my second year, I moved to First Team where my dance partner and I reached the Advanced Ballroom final at the Southern University Dance Championship (SUDC) on February 2018 and we were awarded a Half-blue after competing in the Varsity A team in May 2018 and winning the Best Varsity A team Ballroom Couple trophy, which gets awarded to the couple collecting more points for the team in the Ballroom section of the Varsity competition. In 2018, I also decided to run as team captain, together with my dear friend and co-captain Katjana Lange (Corpus Christi College). We had the honour to lead the Cambridge team to win its 8th National title and 8th Varsity Champions Title. My dance partner, Hendrik Pröhl (Pembroke College), and I danced in the Varsity B team where we won the Best B team Ballroom Couple and Best B team Overall Couple trophies, meaning that we were the couple scoring the most point for the Cambridge Varsity B team in both the Ballroom and Latin matches.

This last year, Hendrik and I kept dancing together and we are very happy with our achievements. Together with two other team couples, we got invited to represent Cambridge, at the Chinese Ball in Vienna, where University Dancesport teams from all over the world are invited. We also reached the semi-final as an individual couple in the Intermediate Category at National in Blackpool (February 2020), where we missed the final by only two marks. The same day, Hendrik and Madelaine Morelli-Batters (Downing College) CUDT captains for the 2019-2020 season, have led the Cambridge team to win its 10th consecutive National title. The team was forced to cancel its Varsity Match, scheduled for May 2020 because of the global COVID-19 pandemic, but team spirit was kept high through regular Zoom training sessions, which have been going since the beginning of the lock-down. 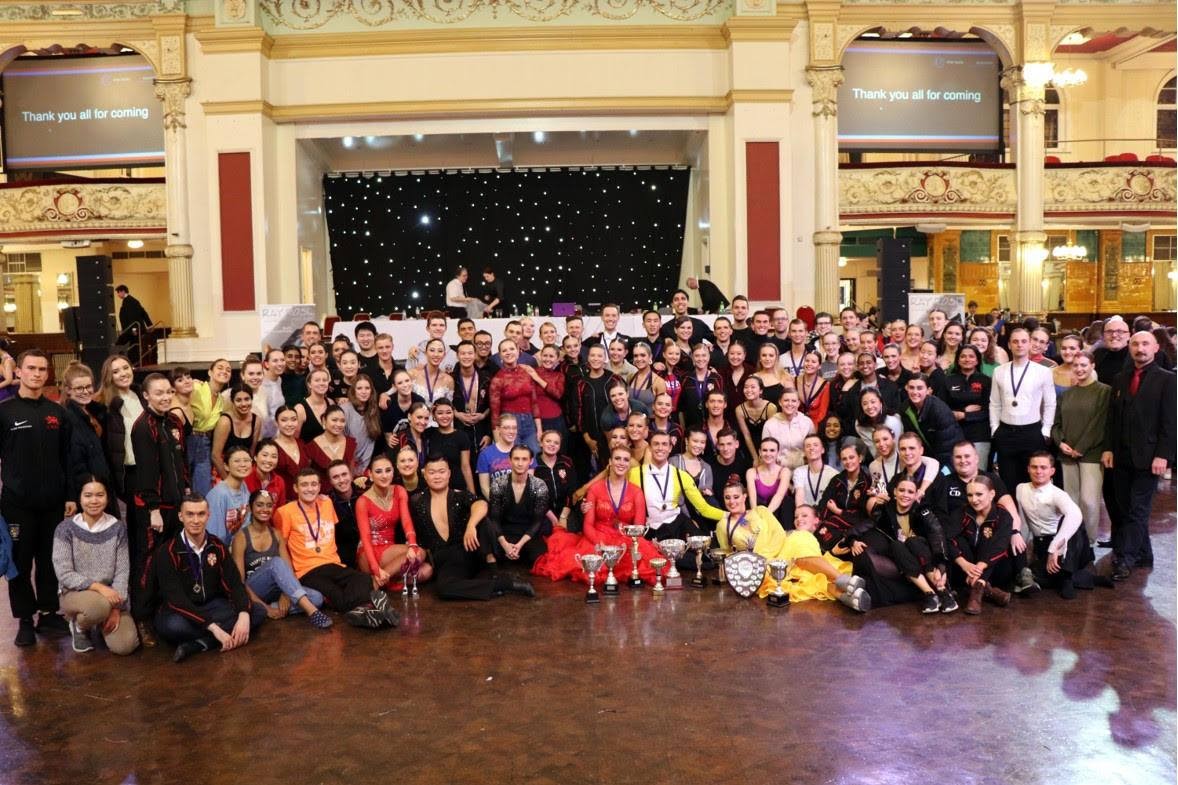 During these four years I have been a team member, a team captain, as well as team costume coordinator and welfare officer, living the team both from the inside and the outside. Dancing as part of a team, other than in your partnership, has taught me to recognise my strength and work on my weaknesses. Being team captain and a team member has shown me that I can separate my own aspirations and the ones of the entire team, although it has not always been easy. Last, but not least, I learnt the importance of working with people you trust and value. I cannot thank Hendrik enough for being an amazing and supportive dance partner as well as a dear friend, who has helped me throughout the last two years, dealing with my captaincy, his captaincy and my last year of PhD.

Now, a few months away from my PhD thesis submission during a global pandemic, I am missing dancing a lot, but now I know that wherever I will be in the future, I want to keep dancing.

All these incredible experiences would have not been possible without the financial support the College provided: the money I received covered the costs of team practices and allowed me to regularly buy dance shoes and dance wear: they tend to wear out quite quickly when you train at least 4 times per week. Dancing has allowed me to take breaks from my PhD and recharge. It has been my way to let go of everyday stress and kept me sane in very demanding times. For all these reasons, I would like to thank Dr Traub for all the support I received through the College Sports Fund during my four years here in Cambridge, which has allowed me to be part of the biggest and most successful University Dancesport team in the United Kingdom. I would like to thank you for helping to make my time in Cambridge unforgettable.