The University is reorganising the governance and academic structure, modernising and raising standards. Lady Perry has been asked to chair a new board to accomplish one half of this reform alongside the Rt. Hon Charles Clarke (former Secretary of State in Blair’s government) to chair a second board to accomplish the other aspect.

Baroness Perry comments on the appointment: “I’m delighted to be associated with the British University in Egypt and to help the inspirational  Chair of Trustees, Farida Khamis,  with her vision for the reorganisation and renewal of the university.”

The British University in Egypt is a not-for-profit private university. It was established following an intergovernmental agreement between the Egyptian and British governments with a view to creating a university in Egypt following the standards and culture of British higher education and offering UK-validated degrees. BUE is governed by a Board of Trustees comprising the President of BUE and eminent public figures from Egypt and the UK.

Pauline Perry, Baroness Perry of Southwark (née Welch; 1931) is Lucy’s Former President, Honorary Fellow and Foundation Board Member and President of the Anna Bidder Society for legators, an educator, educationist, academic, and activist. She has been working as a member of the House of Lords for 25 years. In 1981 she became Her Majesty's Chief Inspector of Schools in England. In 1986 she became Vice-Chancellor of South Bank Polytechnic. When the Polytechnic became South Bank University, Lady Perry and Dr Anne Wright (Former Vice Chancellor of the University of Sunderland) became the first women in history to run British universities. On being questioned whether, as a woman, she was capable of the role, Lady Perry said 'Just because she is small and female doesn't mean she isn't tough'.

Baroness Perry was educated at Wolverhampton Girls' High School and read Moral Sciences (philosophy) at Girton College, Cambridge, where she received an MA. For the next 10 years she taught philosophy, mainly at post-graduate level, in America and Canada.

Find out more about the British University in Egypt. 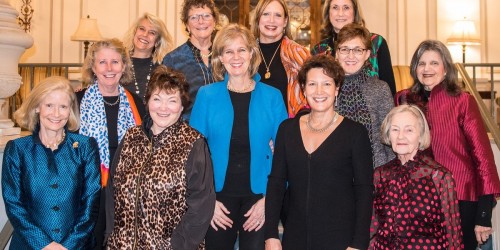