Usha’s earliest and only goal was to be a poet, and she has always felt that poetry and the arts choose you.

“It’s an organic pull from within. Whether you can take the call and run with the wolves is circumstantial. In my life, I was fortunate to have had the needed support from my spouse to devote my life to being a practicing poet. The motivation is simply to write the poem that is coming through. The achievement is making said the unsaid.”

Usha describes some of the best moments of her career so far as her time spent in Cambridge, studying for her MSt, inspired by her beautiful surroundings. She has carried forward heartwarming friendships from College, and been supported by the university and college alumni associations, conversations series with Lucy Sheerman and faculty Jenny Bavidge and Jem Poster. But along with the highs of her career she has experienced cancel culture and the misuse of social media. As with many other careers, Usha admits that as a poet and writer, there will be disappointments along the way, but that it’s to be expected - a guaranteed occupational hazard.

Usha says to anyone considering a career as a writer:

“Toughen up for a long ride, follow your bliss. The path works out differently for each one so there’s no need to be weighed down by norms of success.”

Usha’s new book I will not bear you sons has been many years in the making; in the foreword to the book, Usha says that perhaps it began the day she was born in 1967 as a female in this world. Tackling various global women’s issues such as FGM, rape, foot binding and terrorism, as well as personal issues, the book calls for an international perspective to feminism within the recognition of multiple feminisms. 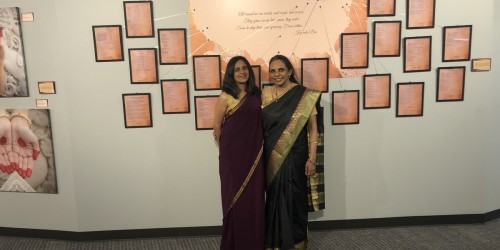 Wall of poetry: a beautiful testimony to immense talent and a communal vision